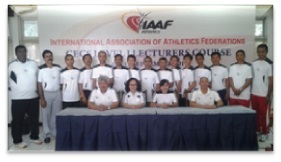 The IAAF CECS Level I (New) Lecturer Refresher Course was the RDC-Jakarta first activity entering the year of 2016. The Course was conducted on 16 – 20 May 2016 in Yogyakarta Province. Course venue was moved to Yogyakarta due to the renovation of  Madya Stadium as well as RDC-Jakarta office  in conjuction to the preparation for the Asian Games 2018.

Key Lecturer of the Course was Mr. Günter Lange, Education Senior Manager  of the IAAF, who was  accompanied by Mr. Ria Luminturaso, RDC-Jakarta Director. The Course was attended actively and enthusiastically by 16 Lecturers from 11 different countries of Member Federations.
The participants were as follows :

Mr. Gunter Lange as a Course Director gave explanation regarding New-Format CECS which is previously 5 levels (2007-2015) and becomes 3 levels. Level I syllabus has been consequently renewed.In order to pass as an IAAF New-Format Level I Lecturer, all participants had to complete the following exams : Practical Presentation, Theory Presentation, Oral Exam and Writing Exam.

After completing the 4-stage examination, the Lecturers gave debriefing and feedback to each participant and stating  their competence as a New Format Level I Lecturer or as an Assistant Lecturer.