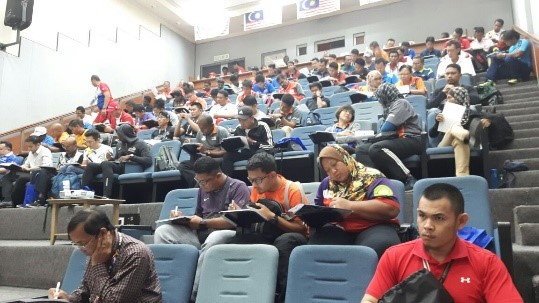 In conjunction with the 29th SEA Games in Kuala Lumpur – Malaysia, the SEACA (Southeast Asia Coaches Association) uses the valueable opportunity to conduct a Seminar on “Conditioning on Speed, Strength and Endurance” and was held on 24 – 25 Agustus 2017. Seminar was attended by approximately 152 Coaches that was included both from the 11 participated Southeast Asia Countries of the SEA Games 2017 and also many Coaches from all states of Malaysia. The expert speakers for this Seminar were Mr. Volker Herrmann (German) – Mr. Nanang Himawan Kusuma (Indonesia) – Mr. Ekkawit Sawangphol (Thailand). Seminar was started with Welcome Speech of the President of Malaysia Athletics Federation, Mr. Dato’ Karim Ibrahim and officially opened by the President of Asia Athletics Association, Mr. General Dahlan Al-Hamad.

Prior to end of Seminar, all Participants were requested to fill in a form of “Coaches Data” as the starting point to establish the SEACA (Southeast Asia Coaches Association). Seminar was officially closed by Mr. Dato’ Karim Ibrahim by delivering his gratitude for making the Seminar and the SEACA happened. All the participated Coaches deserved to received.

“Certificate of Attendance” that was delivered directly by Mr. Dato’ Karim Ibrahim and Dato’ Harjeet Singh.